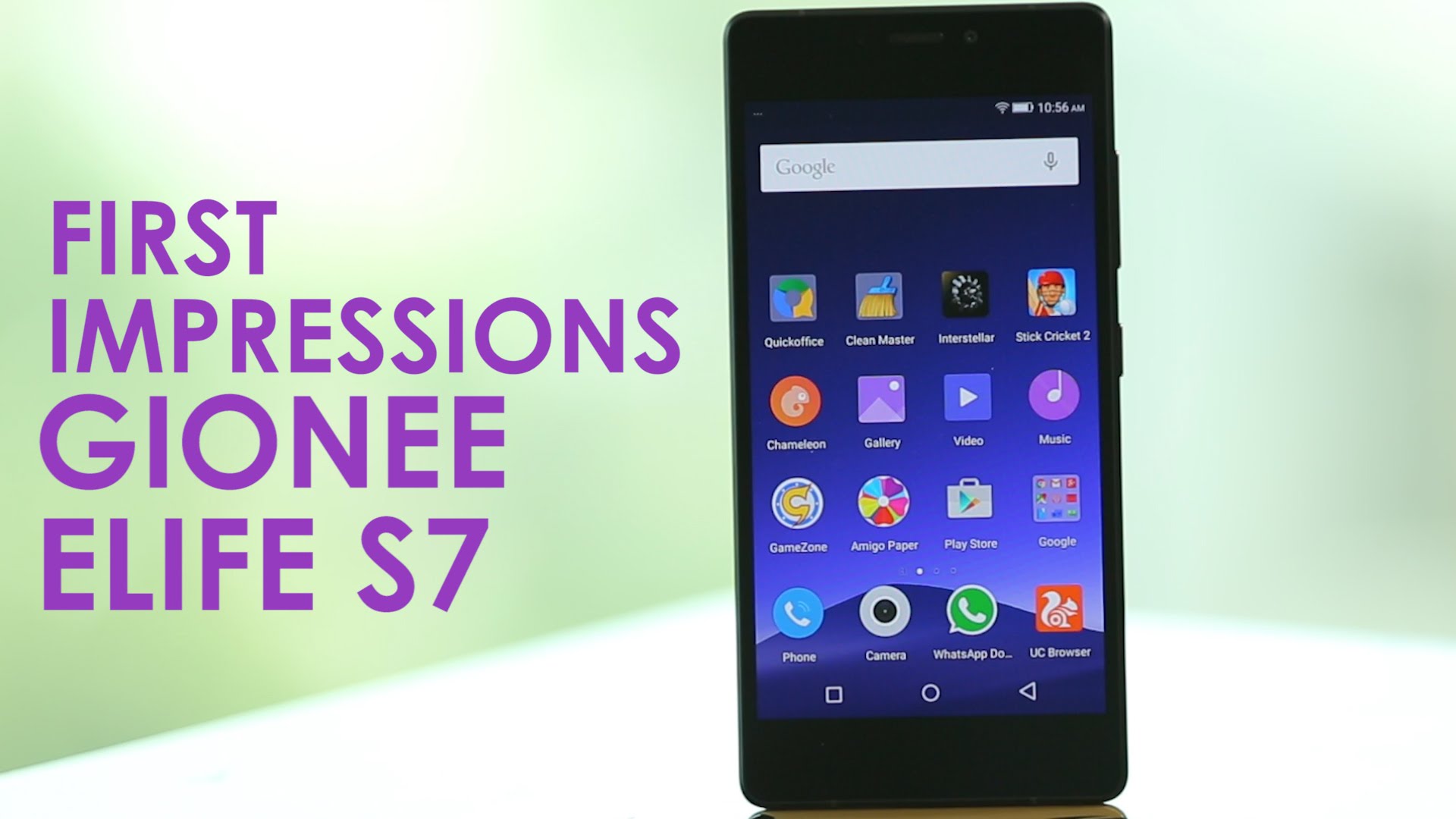 Gionee launched its new flagship smartphone by the Chinese maker, the Elife S7 which will be marketed at a price of Rs. 24999 in India. The device was unveiled at the Mobile World Congress in Barcelona. The phone will have dual sim slots and comes with a relatively impressive appearance and performance features. This slim range of smartphones will be the first of Gionee series to have an Android Lollipop 5.0.

The 5.2 inch Gionee Elife S7 comes under the slim series of phones launched by Gionee. The Elife S7 has a thickness of 5.5 mm and may not be the slimmest smartphone around when compared to other thin phones presently in the market including the Oppo R5 or the Vivo X5 Max. Like its predecessors, the Elife S7 has a sturdy built with a u-shaped design using aluminium magnesium alloy infused frame around the phone; the frame also prevents any chances of bending and gives good structural vigility. The front and back of the phone is well-protected from scratches due to its use of Corning’s Gorilla Glass. It is however prone to fingerprints. The phone weighs a mere 126.5 gm which makes it pretty light. The handsets are available in colours of Black, white and Maldives Blue. The blue is closer to a share of green, which although not pleasing is a unique shade not usually seen on smartphones. The white looks attractive while the black is a classier choice, being more regular colour. The speakers are placed on the bottom edge and headphone jack slot. Overall, its slim profile offers a good grip with comfortable handling.

Gionee S7 has a 5.2 inch display screen with 1080p resolution. The overall ergonomics is comparable to the features of the Motorola Moto X Gen 2. The screen delivers good quality images at all viewing angles. It has an LED light indicator in the front that glows in different colours as per the notification status. The colours of the LED lights can be changed. Navigation with one hand might be difficult but not impossible. One of the notable features of Gionee S7 is the use of AMOLED display using ACL technology with dark theme that helps conserve its battery life while the chipset is aided by Sensor Hub to make the handset more power efficient. This was done after researchers at Gionee discovered that most smartphone users spend 100 minutes on average on using IM applications that significantly drains the phone battery.

The phone has on-screen capacitive buttons and a multitasking menu as offered by the Android Lollipop. It runs on the Amigo UI 3.0, the latest UI offered by Gionee phones. The downside is the lack of a default app drawer. Overall it lacks neatness and the icons appear slightly tacky, which however can be overlooked.

Packed with a storage space of 16GB, the Gionee does not offer option for expandable storage which can become a deterrent for many buyers. Of the 16GB claimed, only 12 GB is available for use.4GB is used by the Android Lollipop and some amount of space is also occupied by the Amigo UI interface.It is powered by a MediaTekocta core chip processor at 1.7 GHz per core and a 2GB RAM out of which 737MB RAM is free. It contains provision for software updates. Overall, the device gives no lag and is very responsive. It offers a sim tray on the side with provision for 2 SIM cards and both capable of running simultaneously on 4G network.In terms of connectivity, the phone comes with options of 2G, 3G and 4G LTE, WiFi 802.11ac, Bluetooth 4.1 and Hi Fi audio. The Hi-Fi level audio offers superior quality sound and features various sound restorations. It also comes with a built in tailor made speaker and smart PA for users to enjoy loud and rich quality sounds from the ultra slim phone.

The S7 phone does not have any camera bulge and is thus not prone to scratches when placed on its surface. The camera is a 13MP camera and an 8MP front facing camera and an LED flash. Under incandescent light conditions, the primary camera captures shots with good details but the colours tend to appear oversaturated. The camera is packed with features such as the new-facial recognition mode, depth-of-field adjustment and other gesture controls for advanced settings under low light conditions. It supports HD video recording. The resolution for the front camera is 720p.Gionee has particularly highlighted the camera features during its launch indicating a good improvement in this sector from its previous versions. The camera’s new image processing system enables users to capture approximately 6 to 7 images per second.

The Gionee S7 is powered with a 2750 mAh battery that supports most of its functions well giving it a decent battery life. The phone serves well for 2 days before it is need of a recharge. When run on the battery aver mode, battery life is extended by another 10 percent with the total adding up to 33 hours.

Priced approximately at around Rs 24,000, the Gionee S7 offers a good value for money with minor glitches which can be overlooked for its overall performance and appearance. Apart from its appearance, the camera and battery life are its USP. The Chinese smartphone maker has also announced its plans of launching the next upgraded version – the Gionee Elife E8 approximately around the second quarter of this year. This will not be a mere incremental upgrade but adoption of completely new designs that potential buyers can look forward to. The company is also reported to have disclosed its plans for setting up a manufacturing unit in India, investing approximately 300 crores over a period of next 3 years. Alongside investment plans the company will also expand its R&D team here. The official announcement for expansion however is yet to be made. Whether the Gionee S7 will stand the test and become a popular choice in the Indian smartphone market, only time can tell.