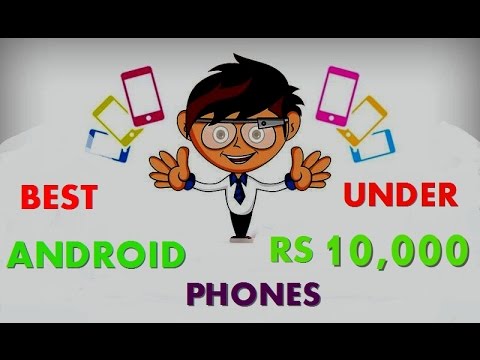 Android is the largest mobile operating system in the world. It is available in a wide range of phones and has a good stock of application. Being open source software, it is used by most smartphone manufacturers in the market.

Previously, the sub Rs 10,000 segment was dominated by Samsung whose phones were sub-par to say the least. The entry of Moto G and E and Micromax in this segment completely revolutionized it. Another wave of change crashed in after Chines companies like Xiaomi entered the market with their superior quality handsets.

Today, there are quite a few phones available in this price bracket from both foreign and domestic smartphone makers. Top Android Phones under INR 10000Â April 2015 have been discussed below.

The Yu Yureka from Micromax has made experts sit up and take notice of the brand. It has a 5.5 inch capacitive touchscreen with resolution of 1280X720 pixels. The glass is scratch resistant and with IPS water protection. The sensors enabled in the device are light and gyroscope along with that for proximity. The processor is one of the most advanced ones right now- Qualcomm Snapdragon Octa Core 615 which clocks a speed of 1.5GHz. The GPU is an Adreno 405 while the RAM is 2GB. The internal memory is 16GB which can be expanded up to 32GB via microSD cards. Its operating system is the Android 4.4 Cynosure which can be upgraded to 5.0 Lollipop.

The camera quality on the device is exceptional as the rear shooter is a 13MP one while the front one is 5MP. It provides great performance for games and has minimal bloatware. The display is quite legible under sunlight and the phone has good built. The Cyanogen OS is powerful and polished and customized for Android. The only drawback (if you consider it to be one) is the humongous size. You can get all this for only Rs 8999.

The handset has a 4.7 inch capacitive touchscreen display unit with FHD resolution at 1280X720p. The pixel density comes to be 312 ppi. The display is scratch resistant and has full lamination and IPS. The colour temperature adjustment has been enabled in it so that the display does not appear too bright. It has sensors such as gyroscope, proximity sensor, ambient light sensor and accelerometer. The phone has a quad core 1.2 GHz Qualcomm Snapdragon 410 MSM8916 processor which is backed by Adreno 306 GPU. The RAM enabled is a 1GB one. Its internal memory is 8GB which can be expanded up to 32GB. The operating system embedded in the device is Android 4.4 which can be upgraded to 5.0.

The phone has gained a reputation for being light and good in build quality. Its matted finish and rounded corners lend a great grip to it. The MIUI interface that has been placed over the Android has great options for customization. The phone has good audio quality and supports dual SIM cards. Its performance is quite well thanks to the Snapdragon SOC. The battery life of the phone is quite good as well. It has been priced at an affordable tag of Rs 6999.

The display of the phone is 5.5 inches in diagonal length and its screen resolution is 1280X720 pixels. The display is a Corning Gorilla Glass 3 which is scratch resistant and has IPS water resistance. Its sensors are Gyroscope, ambient light, proximity and accelerometer. The operating system is an Android 4.4 one which can be upgraded to Android Lollipop 5.0.

The RAM is a 2GB one while the processor enabled is a Qualcomm Snapdragon quad core 400 one which clocks a speed of 1.6GHz. The graphics on the phone are powered by the Adreno 305. Its internal memory is 8GB which can be expanded up to 64GB. The battery has a standby time of 775 hours.

The ergonomics of the phone are quite good as the rounded corners make the phone sit comfortably in your palm. The display unit is vibrant and good. The MIUI interface over the stock Android version is quite interactive and easy to understand. It supports 4G networks and produces good call quality. The battery life is quite good. The lite mode is very useful for those who are not very tech savvy. The drawback of the phone is that it feels quite bulky in your hands.Â  The phone has been priced at Rs 9,999.

This device from Lenovo has been priced at Rs 6,999. It comes with Android 4.4 embedded within which can be upgraded to 5.0. The screen is 5 inches in diagonal length and a capacitive touchscreen one. The resolution of the screen is 1280X720, which translates into a 294 ppi. The display is an IPS type. Its sensors include proximity, ambient light and accelerometer. The RAM of the phone is 1GB while the processor is a Qualcomm Snapdragon 410 quad core one that clocks a speed of 1.2GHz. The graphics is powered by the Adreno 306. Its internal memory of 8GB can be jacked up to 32GB via the expandable memory card.

The phone has a great build and matte finish at the back which helps with the grip. Its rounded back edges lend it a good feel. The Vibe UI over stock Android feels quite easy to be used. The camera on the device is quite good and call quality is clear. The phone also supports 4G networks. The only complaints users have reported is the substandard display without the Corning Gorilla Glass protection.

Priced at Rs 5,249, this device from Micromax has Android 4.4 embedded in it which can be upgraded to 5.0. The screen size of the phone is 4.5 inches and it is a capacitive touchscreen. Its resolution is quite low although, at 854X450 pixels which translates into a pixel density of 215 ppi. The display unit is an IPS one while the sensors enabled are proximity, light, gravity, gyroscope and magnetic. The processor enabled in the device is a quad core MediaTek one which clocks a speed of 1.3GHz. The RAM in the phone is 1GB. It has an internal memory of 4GB which can be expanded to 32GB. However, buyers need not buy a memory card immediately as an 8GB one is provided in the device.

The brushed metal ring around the rear camera lends it a classy touch. The stock Android interface is easy to be used. It provides fluid and smooth performance for everyday tasks. The display is quite good as the pixel density is high. The legibility under sunlight and viewing angles are quite good. Because the phone is powered by Android One, it receives regular Android updates.