Nexus 6 and Galaxy Note 4 – which phablet is ahead 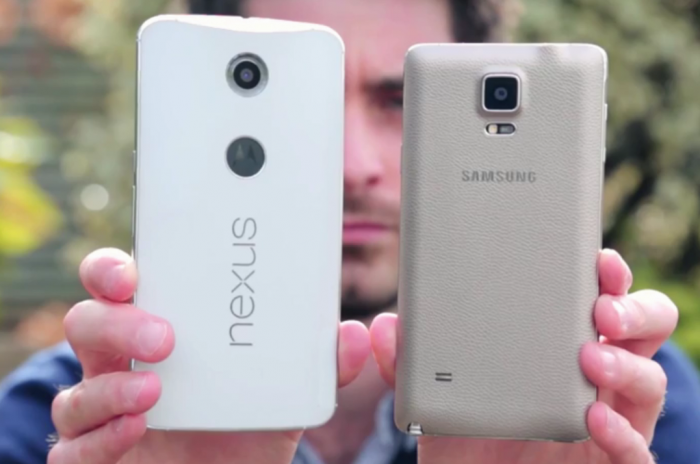 The age of high tech smartphones has arrived and the clash of the titans – Samsung, Sony, LG, Apple and lately Motorola is heating up the market for Android. Recently, the two models which are clashing are the Samsung Galaxy Note 4 and Nexus 6 by Motorola. Both the phones are phablets, measuring 5.7 inches and 6 inches respectively.

The weight and size of both the phones is on the higher side even though their display units are dazzling. The Nexus 6 has a rounded back and is more ergonomic. It moulds into your palm and feels great. The bezels are well fitted in the 6 inch display unit, in the same way that they are fitted in the Galaxy Note 4. Some of the other positives of the Nexus 6 include its front facing speaks and flush camera compared to the lens that protrudes at the rear of the Galaxy note 4.Â  The Nexus 6 is definitely the best looker.

However, in terms of practicality, the Note 4 wins hands down. The back is a removable one which allows you to replace the battery and expand the storage which cannot be done in the Nexus 6. The phone is narrow which makes it easy for you reach both ends of the screen and type easily. The finishing of the Note 4 is much better compared to the Nexus 6 even though Samsung is known for using substandard materials for building phones. Even though both phones shall fit in your pocket, bending while they are in there would be difficult

Specs and performance of the phones

Both the Samsung Galaxy Note 4 and Google’sÂ Nexus 6 have the same Qualcomm quad core chipset powering them which clocks a speed of 2.7 GHz and Adreno 420 GPU for graphics and Krait 450 CPU along with RAM of 3GB. The Samsung phone is shipped in twin variants, one which uses Snapdragon 10 and another that uses Exynos. Both these chipsets are available only in South Korea. Both handsets are capable of handling same kinds of tasks and you wonâ€™t be troubled for quite some time when you use the phone.

Despite being similar, they have their hardware differences. The Note 4 has been embedded with the fingerprint sensor and heart rate monitor which work somewhat. The water resistance used on the Galaxy S5 has not been included in the Note 4 handset. The Nexus 6 on the other hand has a gyroscope for bringing out a monochrome lock screen at the time of touching the phone. It is not as gracious as Active Display on Moto X but is quite handy. Even though both the phones are tied in terms of hardware, the software usage is much different for both.

The TouchWiz user interface that is used in the Samsung handset is quite heavy with bloatware and it slows down the Android operating system and wastes a lot of space with non-removable and redundant apps. Stock Android on the other hand is slick and fast and stripped down for enhancing user experience. The Nexus 6 is powered by Android Lollipop 5.0 or 5.0.1 while the Samsung Galaxy Note 4 uses the Android KitKat with Touchwiz.

The TouchWiz interface is so far the best on the Galaxy Note 4 because it has been built with a stack of functionalities that are specific to the tablet. The important part to it is an S Pen which was controversial initially but is now admired by most people. The S Pen is very accurate and writes with the accuracy and speed of real pens and brings in added functionality. If you bring it close to the screen of Note 4 it being up navigation and app shortcuts and alerts if it has been left behind. When unpaired, the device alerts you.

The TouchWiz has been optimized for multi window functionality in order to make best use of the massive tablet screen size. For instance, you can now watch your favourite Youtube videos while checking your mail. Stock Android 4.4 KitKat does not allow these functionalities which is why it had to be modified.

Incidentally, this is the case with Android Lollipop as well on the phone. There are no added features offered in the phone which would make you switch from the Nexus 5 to Nexus 6, except a bigger screen. The Android L operating system has shown its own problems of being slow and unresponsive at times. The fact that the Nexus 6 automatically updates the device to the latest software launched by Google makes it even worse as you are often stuck with bad software.

If the operating systems of both phablets have been disappointing, then the cameras will definitely uplift your spirits. Both the Note 4 and the Nexus 6 have the best camera possible in todayâ€™s time. The camera on the Note 4 has been acclaimed everywhere but the shooter on the Nexus 6 is what is better for the longer term. Even though the Note 4 is better for low light performance the Samsung device falters when it comes to bright conditions as the images appear over sharpened. The display unit shows the photos to be really good but when plugged to a bigger device, you can see finer lines on the photos which indicate that the camera tried to fake the detail.

Despite both the phablets being competitors to one another, they have different features on offer and their pros and cons are very different as well. The Note 4 is much like a mobile office which is packed with functionality and features and spells practicality for the stylus, removable battery and expandable storage. In contrast, the Nexus 6 seems more like iPhone 6 Plus- faster updates, stock operating systems, non-upgradable storage and fixed battery.

If you are looking for a mobile with a large screen, then Nexus 6 is a better choice. It has a stunning camera, Android Lollipop and good speakers and shall get better when upgrades are released. It would be better for battery life and overall performance. The phone is yet to reach its true potential but the time shall come. However, if you want the most productive mobile then the Galaxy Note 4 is definitely a better choice and it even beats the iPhone 6 Plus in this context. It points out blatantly the shortcomings in Google for the phablet system as no specific features are included for these devices.