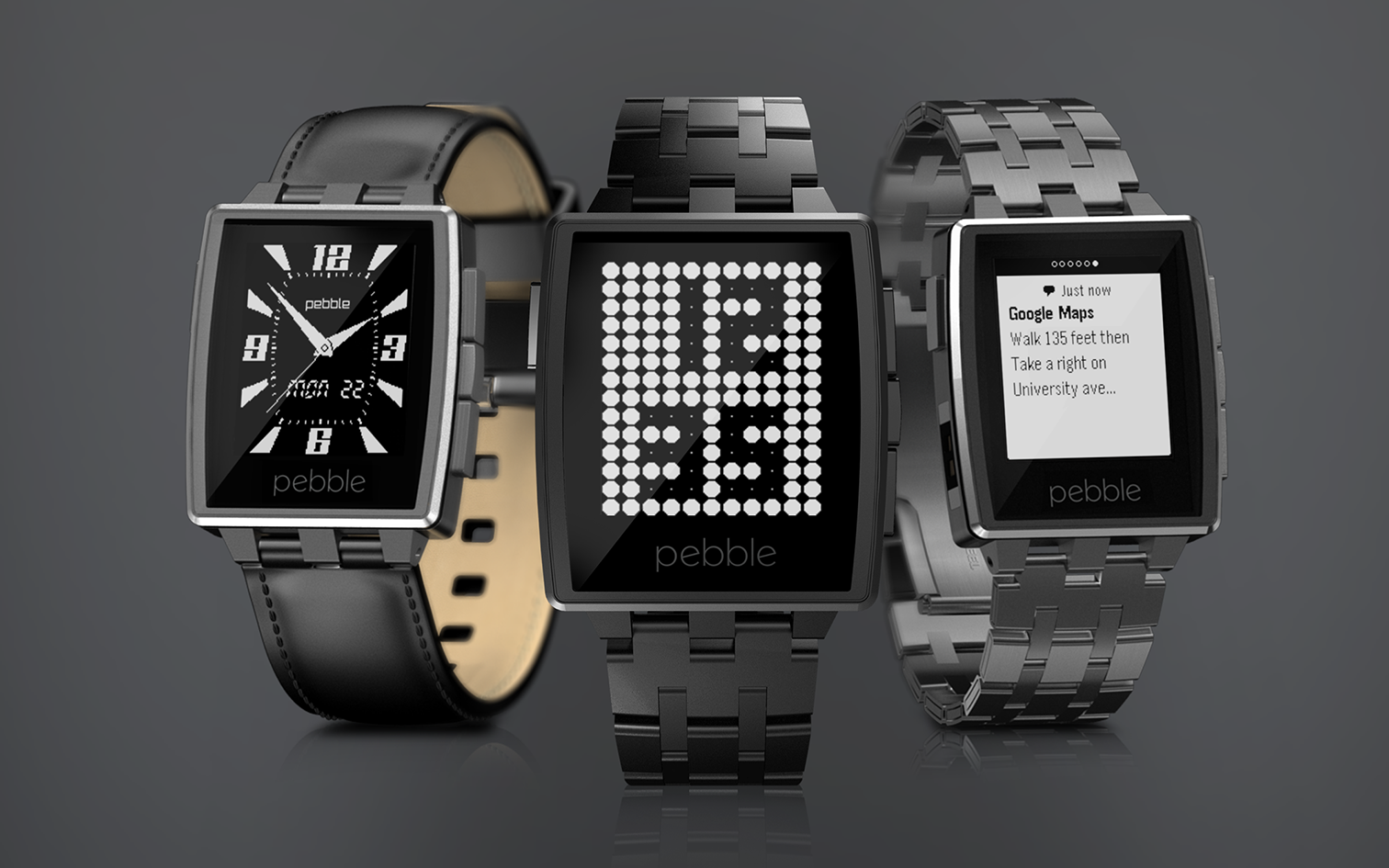 The Pebble Steel is a smart watch which was released in January 2014 and comes in a stainless steel body. Its features are quite backdated compared to what is available now- the display is a black and white one and is non-touch enabled. The watch does not track heart rates either and can story eight applications only at one time.

The watch is shower and swim friendly because it is waterproof and the display can be read clearly even under the sun. The battery lasts longer compared to other smart watches and it works well with Android and iPhones. The dial is a lot more discreet and small compared to the Moto 360 and Samsung Gear S.

The technology of wearable devices is rapidly changing and many smart watches are set to be launched in this year which would make the Pebble Steel watch seem more outdated. In fact, Pebble may come up with a third generation of the watch sometime later in the year. However, the Pebble Steel is quite a good model to go for if you want watches that handle regular notifications well enough, has an alarm clock built in and can be worn all through the day and has numerous fun applications to tinker with. It is better than most smart watches that are available in the market and looks more polished than other smart watch devices. The watch looks classic and retro chic and will bring compliments your way. It is heavy enough and feels substantial but is much less bulky compared to other large screened Samsung gear and Android wear smart watches. The watch does not look crazily futuristic at all. In fact is a great buy for a formal event. The watch feels quite comfortable and you can go for the leather band which comes bundled with the watch. The steel band in fact comes at an extra cost of $20. However, it is worth the upgrades. This is what makes the gear shower friendly.

Silent buzzes when notifications pop up

The device can be plugged to a phone and you can do a lot with the watch when you donâ€™t have the phone on you. You can feel your wrist buzz when your phone rings and you can also track payment receipts from Apple Pay. You can also get to know when important mails come. You can see Twitter and Facebook IMs along with texts. However, replying from the watch is not possible. You can control the notifications that you receive by accessing the phone and altering the apps whose notifications you want to receive. The Bluetooth on the Pebble also works very well.

It works with Android and iOs

Samsung Gear watches can work only with Samsung handsets as Android wear works only with Android smart phones. The Apple Watch that is coming up shall work only with the iPhones. However, Pebble works across both Android and iOS and most the applications do as well. All you need is a phone with Bluetooth 4.0 or Bluetooth LE and must run current software. The software experience is the same across most operating systems.

The last Pebble firmware update permitted step tracking in the background which wasnâ€™t done before. It can work well as a pedometer which was not allowed before. In fact two apps that are already available from Jawbone Up and Misfit are there on the watch. A swimming tracking device from swim.com is also there in the watch. The app from Misfit tracks sleep and steps taken while the one from Jawbone Up tracks steps only. Both the device can be synced to Android and iOS apps with a little coddling.

The steps counted are often better than what the accurate fitness bands offer. But the functionality that Pebble displays with the third party applications is a big positive. You can use it as a replacement for the Jawbone Up or Shine band. It does not have the same kind of get up and move along vibration features or alerts that is there in the power-nap application from Jawbone Up. If you change fitness applications, the steps are not carried over either. However, sleep and step tracking is a good bonus to work with in a watch of this price.

Wide collection of apps which are free mostly

Some of the apps are quite handy while the rest arenâ€™t, but it is undeniable that the Pebble Steel has an extensive range of free watch faces and apps which spans the gamut from ridiculous to sublime. Apps for ESPN sports score, weather watch faces, Foursquare and Yelp, camera remotes, games and fitness apps. You can use the four buttons of Pebble for interacting for most of these superficial apps which do not require taps work quite well.

The Pebble Steel watch can be charged with the magnetically attaching cable along with an LED which turns to green from orange when charged. Charging takes only a couple of hours. Once the watch has been charged the battery life lasts from two to five days based on the number of notifications being pushed and background fitness tracking application running in the background.

It is not a dramatic leap in technology and traditional watch users may be alarmed at the thought of charging a watch every few days. However, its battery life is much better compared to the LG G Watch R, Samsung Gear S or Moto 360 which have coloured screens and need to be charged every day or so.

There has been considered improvement in Android wear along with the promise of Android watch and the AAA applications. These would change the landscape of wearable devices. However, the Pebble Steel should be viewed as a watch first and a smart watch device next. It can be worn to several events with Ã©lan and serves the purpose of a watch. It hardly takes much time to be recharged. You can simply put it on and head outdoors. It has a novelty factor working in its favour. The gadget may not be a necessary one but if you would want it, this is the best time to go for it as it comes for $99 for the plastic band one. The steel watch too costs less than $200.